The man trying to change the ‘frightening epidemic’ in sport 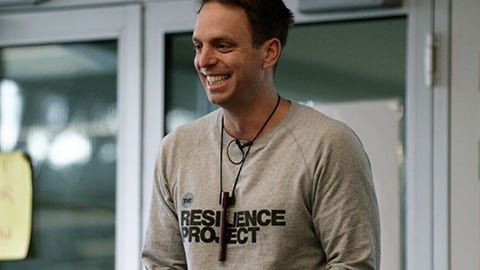 By James Willoughby, The New Daily

Some people just have a way with words.

It takes all of about two minutes to figure out why the engaging and passionate van Cuylenburg and his team are in so much demand from sporting clubs, schools and businesses across the country (he did 485 talks in 2015 and 482 in 2014).

Mental health is an issue that affects one in five Australians every year, according to Mindframe, and the 36-year-old says it is an ‘epidemic’ within elite sport.

It is an issue he is trying to combat, though, and in the past 12 months van Cuylenburg has worked with every NRL club, 10 AFL sides, every state cricket team and Netball Australia. He also individually mentors sporting stars across a range of codes.

“In Thiksey, they had no running water, no electricity, no beds – everyone sleeps on the floor,” he told The New Daily in Mental Health Week.

“Yet they are a lot calmer than we [Australians] are, a lot happier than we are and a lot more relaxed. I was fascinated by that.

“What I observed in living with these people for three months was that they practise gratitude, empathy and mindfulness every day.”

Van Cuylenburg initially went into teaching to try to “help kids avoid mental illness” after watching his sister struggle with it.

But it was his Indian visit that triggered The Resilience Project – which started with a 2011 talk to Year 7 students at Kew High School.

Awareness for mental health issues back then was not what it is now and van Cuylenburg admits “schools weren’t that interested” initially.

Word of his program quickly spread, though, and in the past three years he estimates The Resilience Project has reached over 150,000 people – of which around 10 per cent are involved in elite sporting environments.

“Anxiety levels are much higher amongst elite sportspeople,” he said.

“That’s just a really dangerous model to live your life by. And they also get smashed on social media.

“They could avoid the paper 10 years ago. Social media makes criticism too hard to avoid.”

How to become mentally healthy

Van Cuylenburg says athletes – and everyone else – can become mentally healthier by practicing gratitude, empathy and mindfulness.

“To practice gratitude, I say to people to write down three things that went well for you during the day – and do it for 21 days,” he said.

“You can write down in a journal or in your phone. After 21 days, the science says you start to re-wire the brain.

“In Australia, we are seven times more likely to notice a negative than a positive.

“But after 21 days, we are three times more likely to notice a positive than a negative.

“People might think it sounds a bit soft … but stars from all codes are doing and loving it.

“For mindfulness, I recommend practising meditation through a range of apps [Buddhify Squared and Headspace if you’re interested].

“It’s not deeply philosophical, it’s not spiritual – it’s about spending 10 minutes a day shutting off everything else, putting your headphones in and just giving your brain a bit of a rest from what’s happening.

“And with empathy, I recommend doing things for other people. It doesn’t have to be every day.

“But just think about somebody else and do something for them every now and then. It makes a big difference.”